First we worked on polite kennel release behavior – sitting and waiting calmly before being let out – then he went out to potty.  We then leashed him up and introduced polite front door behavior.  Oscar began learning that to make the door open – and keep it open – he has to sit politely instead of pawing at it or sticking his nose out.

At last, he made a good choice and we were off!

Oscar’s backyard lessons from last session really paid off, as he gave me wonderful attention and trotted nicely at my left side.  Since he’s a little puppy who needs exploration, I also gave him a lot of “Go Sniff!” releases so he could investigate the environment.  And what an investigation!  Detective Oscar found this terrible crime scene right down the road!

We continued on and introduced Oscar to:

Oscar learned that when he sees a distraction, he should sit and focus on his handler instead of charging against the end of the leash.

We continued our polite leash walk/sniff and explore lesson all the way back to the house.

Back at the house, Oscar was performing a bullet-fast come when called! We repeated this several times with a big puppy party, and he was MUCH improved over last week! He focused in instead of getting the puppy zoomies. Lovely progress!

After returning inside, Oscar decided he was T.I.R.E.D.  He flopped on the floor.

This was a good time to work on his handling and vet restraint some more.  We really focused on him accepting bodily restraint, head restraint, paw touches and handling, and mouth handling.  Calm, relaxed puppy behavior was rewarded with lots of cuddles and release to go play.

Then, we went for something new. It was time for… the chicken foot.

We spent a good amount of time starting to build a positive emotional response in Oscar when he is approached while chewing on something special. This is important so that he doesn’t think he has to guard items from his family.

After the chicken foot lost its lustre, we repeated the exercises with a cow tail, and then a twisty… cow-y… thing?

After this, Oscar decided he needed a little break.

Last, with Oscar at the end of his puppy attention span, we did a few repetitions of a Down. Oscar followed the lure beautifully and dropped right into position.

Oscar can’t wait for his last visit to show his parents all the things he learned! 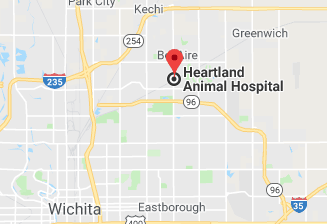